Virginia’s endless beauty can be seen everywhere you look, from the mountains to the beaches, but often overlooked in the search for gorgeous scenery are college campus in the Commonwealth. With over 40 colleges and universities blanketing every region, prospective college students have plenty of options to choose from, but you don’t have to be a high schooler interested in touring college campuses (or the parent of one) to appreciate the natural beauty found on university grounds. Take a walk through these stunning college estates to experience some of the best maintained landscapes in Virginia. 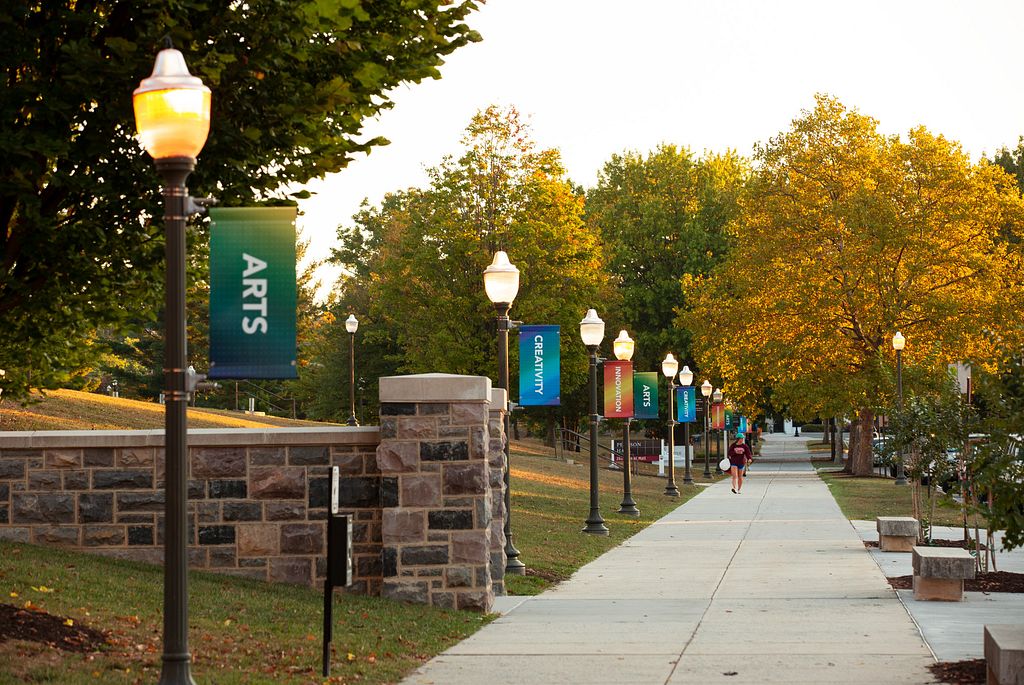 Virginia Polytechnic Institute and State University, commonly called Virginia Tech for short, is the third largest university in Virginia, with an average of about 31,000 undergraduate students. Over 2,600 hundred acres make up the main campus, with a wide oval yard called the Drillfield in the center of the grounds. The Peggy Lee Hahn Horticulture Garden cover six acres with woods, cultivated gardens, and a 200 foot stream filled with fish. The woods consist mostly of maples and dwarf conifers, and the gardens are bursting with fragrant, bright flowers and unusual plant species.
Many of the buildings on the main campus at Virginia Tech incorporate Hokie stone, a stone found in Virginia that is mainly grey, with streaks of brown and pink running throughout. Since the 1990’s, the Board of Visitors decided that all buildings built on campus should utilize Hokie Stone, and it was passed as policy in 2010. One of the most recognized buildings on the campus to use the stone is the fortress-like Burruss Hall, which operates as a hub for the college’s administrative staff.

The private liberal arts college of Emory & Henry resides on 335 acres in the Appalachian highlands of Southwest Virginia. The central campus uses 168 acres of the land, and the remaining undeveloped land encircles the campus, providing an air of hidden beauty to the college grounds. The school maintains the intimate feel you would expect from a small private college, with a student body of about 1,100 undergraduates. Founded in 1836, Emory & Henry has the distinction of being the oldest higher learning institution in Southwest Virginia, and the Central Campus is listed on both the Virginia Register of Historic Landmarks and the National Register of Historic Places. Confederate troops used the still-standing Wiley Hall, built in 1838, as a hospital during the Civil War. More recent architecture echoes the grandeur of the original buildings, and include the James H. Brooks Field House and the Woodrow W. McGlothlin Center for the Arts. In addition to marvelous architecture and history, the campus has natural beauty, with a duck pond thriving with wildlife year-round due to a spring that feeds into the pond. 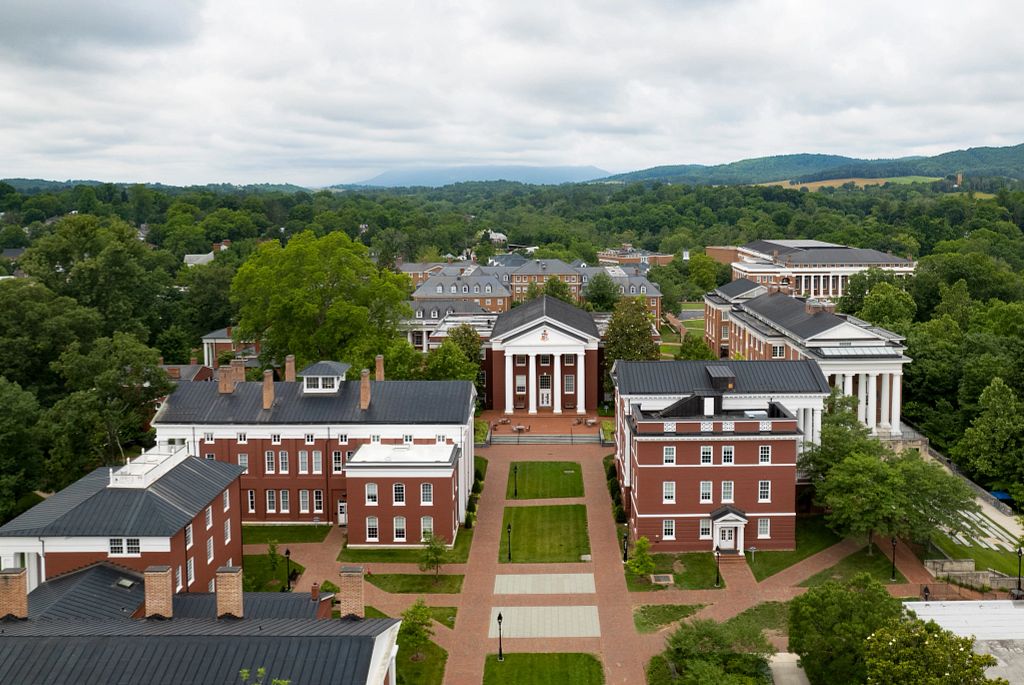 Washington & Lee, a private liberal arts university in Lexington, sits on 325 acres between the Blue Ridge and Allegheny Mountains. The college is in the famously beautiful Shenandoah Valley, so it is no surprise that this university made our list. The red brick Colonnade and the late Victorian-style Lee Chapel, named for Confederate General Robert E. Lee, are both registered as U.S. National Historic Landmarks, adding to the historic allure of the grounds. Washington & Lee dates back to 1749, when it was originally founded as Augusta Academy, but later changed its name and relocated to the Lexington site in 1780. It is the second oldest college in Virginia and the 9th oldest higher learning institution in the U.S., but still keeps a small student body of roughly 2,000 undergraduate students. 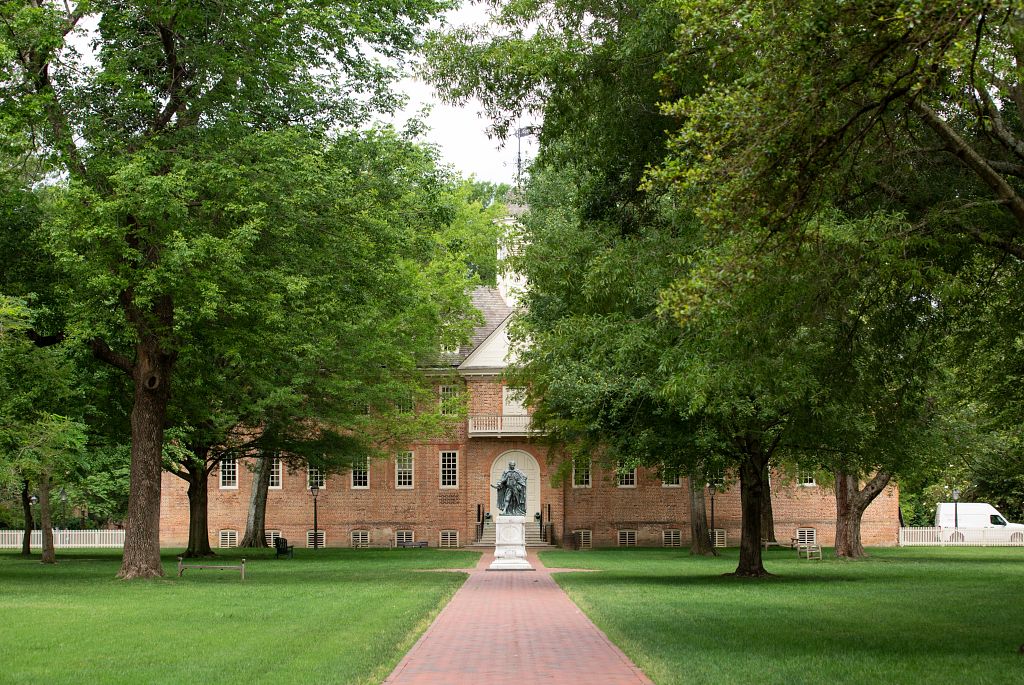 As a public research university royally founded in 1693 by King William III and Queen Mary II, William & Mary carries the prestige of being the second oldest higher learning institution in America, after Harvard. Another impressive distinction for the school? Three United States Presidents, Thomas Jefferson, James Monroe, and John Tyler, received their education at William & Mary. The school’s historic significance also shows in the architecture, such as the Wren building, a structure built by famous British architect Christopher Wren. Although the original burned down a mere seven years after the school was established, it was rebuilt to match Wren’s specifications. In total, the campus stretches across 1,200 acres of grounds, and has three distinct sections, known as the Ancient, Old, and New Campuses. The majority of the grounds consist of woodlands and the impressive Lake Matoaka, and trails run throughout the property, allowing students and visitors to enjoy a peaceful stroll through the grounds. The Crim Dell pond is another popular spot for scenery, with a charming wooden bridge arched across the water. On warm, sunny afternoons, students can be found studying or playing games at the Sunken Garden on the Old Campus, a long section of perfectly manicured lawn lower than the surrounding grounds. 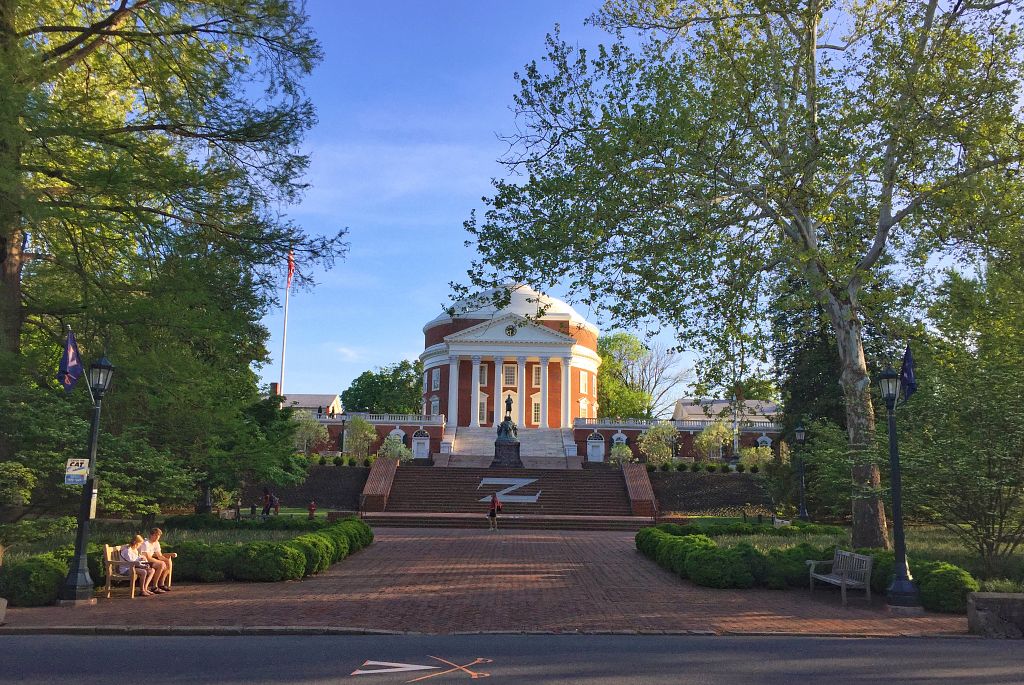 Designed by Thomas Jefferson and formally established in 1819, the University of Virginia covers 1,682 acres of grounds in Charlottesville and acts as a public-private university, with a portion of the funding coming from the Commonwealth of Virginia and the rest derived from tuition and alumni support. The elegant architecture and rich history of the campus are world-renowned, with examples of its unique Jeffersonian architecture spread across the grounds. The green stretch known as The Lawn (you can actually hear the capitalization in the pronunciation) leads up to the Palladian-style Rotunda, which draws inspiration from Rome’s Pantheon. The dome-like building was finished in 1826, and is one of only three structures in the United States to be designated as a UNESCO World Heritage Site. Old-fashioned dormitories still in use flank The Lawn, one of which was the former residence of famous writer Edgar Allan Poe. With a student body of about 17,000 students, the university is in no way small, but the campus is spread over extensive grounds, allowing the school to retain a quaint yet sophisticated charm.

One of only three four year, all-men’s liberal arts colleges in the nation, Hampden-Sydney College’s secluded campus is located just a few miles from the more developed town of Farmville. It is also the oldest private charter college in the Southern U.S., the 10th oldest college in America, and the last college founded before the start of the American Revolution. The school enrolls about 1,100 students on average, and the campus has expanded since its establishment in 1775 from 100 acres to 1,300 acres of lush lands surrounded by scenic woodlands. With a noteworthy presence in the Civil War and part of the campus listed on the National Register of Historic Places, the school has a long, interesting history which is evident in the buildings. Two of the brick structures, Cushing Hall (built in 1822) and Venable Hall (1825), provide examples of Hampden-Sydney’s historic significance in architecture, but the real beauty at the college lies in the manicured, old-world landscape and picturesque grounds. A walk through Hampden-Sydney College acts as a portal through time, to an age where genteel southern tradition and untouched countryside were the rule rather than the exception.

James Madison University, a public research university with about 20,000 undergraduate students, has a complex history, with many notable changes occurring since its foundation as the State Normal & Industrial School for Women in 1908. Over the years, the name changed to Madison College in 1938, the college became co-ed in 1946, and in 1977, the school finally altered the name to its current title. The buildings grew from the original two, Jackson and Maury Halls, to more than 148 major buildings spanning the 721 acre campus. But what hasn’t changed over the years is the stunning campus scenery, located in the pristine town of Harrisonburg in the Shenandoah Valley. The grounds include Newman Lake and the Edith J. Carrier Arboretum, over 120 acres of urban botanical preserve within Harrisonburg that features lush botanical gardens and 92 acres of quiet forests. Wilson Hall, named after former President Woodrow Wilson, is the centerpiece of the university’s main quad, and students spend their free time on sunny days hanging out on the university’s expansive lawn. 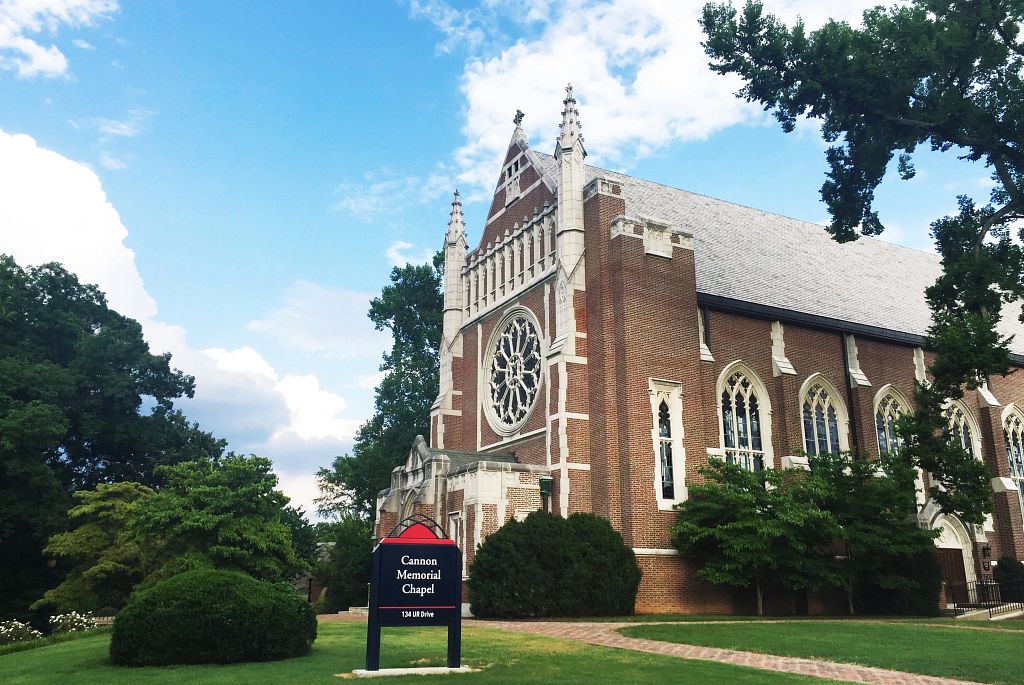 The 350 acres of grounds at University of Richmond were the work of American landscape designer Warren H. Manning, and the results are both impressive and beautiful. The private university sits alongside the waters of Westhampton Lake, reflecting the red brick, Gothic-style buildings of the university. Famous architect Ralph Adams Cram conceived a few of these magnificent buildings, including Jeter Hall, one of the student housing locations. The school was established in 1830, but actually moved to its current location from central Richmond in 1914. Though the city of Richmond has grown steadily, the university managed to preserve the quiet grounds over the next century. When you wander the University of Richmond grounds nowadays, it is easy to forget you are in the bustling capital city of Virginia.

The informal sister school to Hampden-Sydney, Sweet Briar College was established in 1901 as a women-only higher learning institution. The campus consists of 3,250 acres of grounds near the Blue Ridge Mountains, with wide green lawns and carefully maintained gardens spread across the campus. Sweet Briar’s world-renowned equestrian program adds to the beauty of the campus, with rolling meadows, pristine practice grounds, and stables stocked with the resident horses available for students interested in learning to ride. With 21 of the 30 buildings on the campus listed on the U.S. National Register of Historic Places, Sweet Briar’s architectural elements complement the natural beauty of the grounds.

Whether they are small, private colleges or larger public universities, these schools know how to make the most out of Virginia’s breathtaking scenery. Take a tour of the grounds at a few of these educational landmarks and discover the beauty of the Commonwealth’s collegiate destinations.